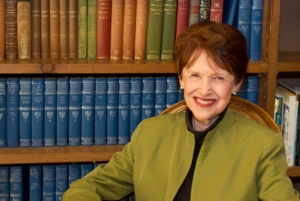 DR. RIANE EISLER, JD, PhD (hon) is a social systems scientist, cultural historian, attorney, consultant, and speaker. Her work has transformed organizations, policies, and people worldwide, and her book Nurturing Our Humanity: How Domination and Partnership Shape Our Brains, Lives, and Future (co-authored with anthropologist Douglas Fry, Oxford University Press 2019) shows how to use partnership systems to construct a more equitable, sustainable, and less violent world.

Dr. Eisler is Founder and President of the Center for Partnership Studies (CPS), dedicated toresearch and education, and Editor-in-Chief of the Interdisciplinary Journal of Partnership Studies, an online peer-reviewed journal at the University of Minnesota. CPS was created to build upon a momentum following keynotes at conferences nationally and internationally, addresses to the United Nations General Assembly, the U.S. Department of State, and Congressional briefings, as well as talks given at corporations and universities worldwide on applications of the partnership model introduced by Eilser’s pioneering work reviewing human history and prehistory from a systems science perspective. Her bestseller, The Chalice and The Blade: Our History, Our Future, the first book reporting her findings, is now in 27 foreign editions and 57 U.S. printings. Her next book, The Real Wealth of Nations: Creating a Caring Economics, was hailed by Archbishop Desmond Tutu as “a template for the better world we have been so urgently seeking.” Other publications from Eisler’s research include the award-winning Tomorrow’s Children, Sacred Pleasure, and Women, Men, and the Global Quality of Life, which statistically documents the key role of women’s status in a nation’s quality of life. Notably, Eisler’s Equal Rights Handbook, is the only mass paperback on the proposed Equal Rights Amendment.

Dr. Eisler taught at UCLA, CIIS, and the University of Alabama, and she authored over 500 articles in publications ranging from Behavioral Science, Futures, Political Psychology, The Christian Science Monitor, Challenge, UNESCO Courier, Brain and Mind, Human Rights Quarterly, International Journal of Women’s Studies, and World Encyclopedia of Peace, as well as chapters for books published by trade and university presses (e.g., Cambridge, Stanford, and Oxford University). Her research provides a new, urgently needed perspective on our past, present, and possibilities for the future, introduces a systemic change roadmap for building a more humane and sustainable world, and expands the concept of human rights to include the majority of humanity: women and children. Along with founding the Center for Partnership Studies, Eilser launched the Caring Economy Campaign, to demonstrate the economic value of caring for nature and caring for people, starting at birth. Since 2019, the Center for Partnership Studies has been developing a Social Wealth Index (SWI) using data from OECD countries to provide a concise guide to business and government policy-making in the post-industrial era.

Dr. Eisler is the only woman among 20 major thinkers, including Hegel, Adam Smith, Marx, and Toynbee in Macrohistory and Macrohistorians, to be acknowledged for her innovative work as a cultural historian and evolutionary theorist. Among the many honors she has received, some highlights are the Nuclear Age Peace Leadership Award, the Feminist Pioneer award, and reognition in Great Peacemakers as one of twenty renowned leaders for world peace, alongside Mahatma Gandhi, Mother Teresa, and Martin Luther King. In 1970, Dr. Eisler wrote an amicus curiae brief to the US Supreme Court explicating the legal opionion that gender-based discrimination violates the Equal Protection clause of the 14th Amendment. 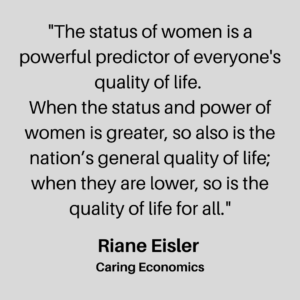 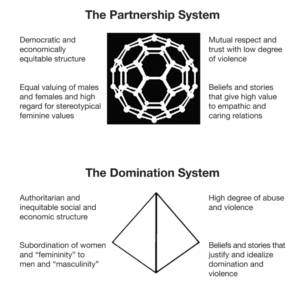 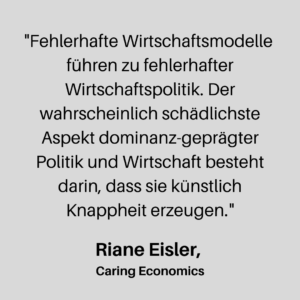 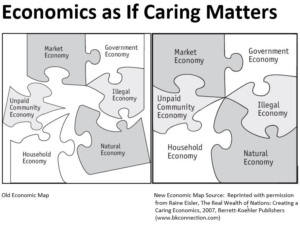 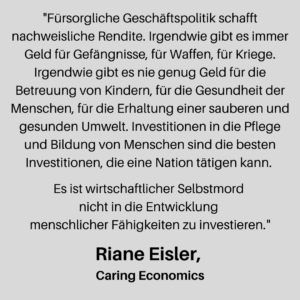 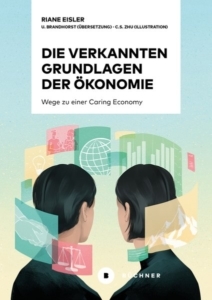 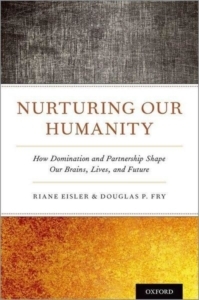 Nurturing Our Humanity offers a new perspective on our personal and social options in today’s world, showing how to structure our environments-from family and gender relations to politics and economics-to support our great capacities for consciousness, caring, and creativity. It examines where societies fall on the partnership-domination scale, and how this impacts equity, sustainability, peace, and how our brains develop. 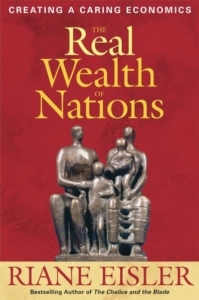 The great problems of our time such as poverty, inequality, war, terrorism, and environmental degradation are due in part to our flawed economic models that set the wrong priorities and misallocate resources. Conventional economic measures, policies, and practices fail to give visibility and value to the most essential human work the work of caring and caregiving. We can’t expect more caring policies and more life-affirming practices as long as our underlying system of values and social institutions devalue caring and caregiving. 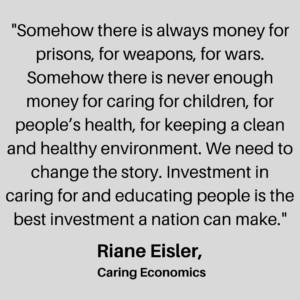 “GDP includes activities that harm and take life, as productive work. It is not just making the cigarettes, also the resulting medical bills, the resulting funeral bills. They are great for GPD. Same is with oil spills, the cleanup costs. Not just that the GBD includes negatives as positives. GPD failed to include to count the economic value of the life-sustaining activities.
Of course, you cannot quantify the value of caring, but you can quantify its economic value.” Riane Eisler 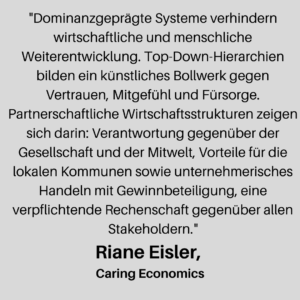 “We need a strong free market, enlightened government policies, giving visibility and value to the work of caring for people and nature. We need to left behind this domination economics.” Riane Eisler